Heart disease is one of the leading causes of death, and for the past 60 years, saturated fat and cholesterol have been wrongfully vilified as the culprits. Fortunately, the truth is finally starting to see the light of day.

Dr. Kummerow, author of Cholesterol Is Not the Culprit, is now nearly 100 years old. He has spent eight decades immersed in the science of lipids, cholesterol, and heart disease, and he was the first researcher to identify which fats actually clog your arteries.

His work shows that it's not saturated fat that causes heart disease, rather trans fats are to blame. Dr. Kummerow was the first to publish a scientific article on this association, all the way back in 1957! Needless to say, the US Food and Drug Administration's (FDA) move to get trans fats out of the American diet is long overdue.

Now, the rest of the world is finally starting to catch up with him. A review from Cambridge University, published in the journal Annals of Internal Medicine in March, is the latest analysis to confirm the absolute lack of evidence that consuming saturated fat leads to heart disease.

They also found no basis for guidelines that recommend increased consumption of polyunsaturated fats to lower your cardiac risk, calling into question all of the standard nutritional guidelines related to heart health.

As noted in the June 23, 2014 Time Magazine cover story refined carbs, sugar, and processed foods are the real enemy—not the saturated fats found in foods such as butter, lard, or eggs.

Part of the confusion on fats revolves around its impact on LDL cholesterol, often referred to as "bad" cholesterol. According to the conventional view, high LDL is correlated with heart disease, and saturated fat does tend to raise LDL. However, we now understand that there are TWO kinds of LDL cholesterol particles:

More importantly, research has also shown that small, dense LDL particles are increased by eating refined sugar and carbohydrates, such as bread, bagels, and soda. Together, trans fats and refined carbs do far more harm than saturated fat ever possibly could.

Flawed Nutritional Guidelines Have Created a 'Pandemic' of Heart Disease

Between 1920 and 1960, Americans' butter consumption declined by over 75 percent, yet heart disease went from a relatively unknown condition to the number one killer. Consumption of trans fat radically increased in the mid-1950s, and rates of sudden death from heart disease have faithfully risen right along with trans fat consumption.

Today, there are 30,000 items in the American diet that contain trans fats, according to the FDA. That should give you an indication of just how prevalent these dangerous fats have become!

Basically, if you eat processed foods, you're likely eating trans fats. Many products that claim to be "zero trans fat" simply have portion sizes that are so ridiculously small that the trans fat falls below the permissible limits and therefore do not need to be listed.

Authority Nutrition has assembled several graphs with side-by-side comparisons of obesity and heart disease trends with nutritional trends over time. These graphs make it easier to visualize how the low-fat recommendations have done you no favors whatsoever. For example, the following graph shows how the European countries that eat the least saturated fats have the highest risk of heart disease:

In Europe, the Countries That Eat the Most Saturated Fat Have the Lowest Risk of Heart Disease 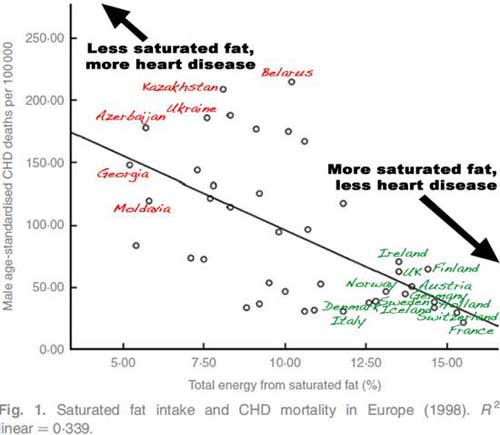 Dr. Kummerow is still a prolific researcher and writer, and has published four papers in the past couple of years alone. Some of his most recent research shows that there are two types of fats in our diet responsible for the formation of heart disease:

"The problem, [Dr. Kummerow] says, is not LDL, the 'bad cholesterol' widely considered to be the major cause of heart disease. What matters is whether the cholesterol and fat residing in those LDL particles have been oxidized... 'Cholesterol has nothing to do with heart disease, except if it's oxidized,' Dr. Kummerow said... [He] contends that the high temperatures used in commercial frying cause inherently unstable polyunsaturated oils to oxidize, and that these oxidized fatty acids become a destructive part of LDL particles. Even when not oxidized by frying, soybean and corn oils can oxidize inside the body."

Butter IS a Health Food!

For millennia, butter has been prized for its abundant health benefits, not to mention culinary appeal. Keep in mind that butter's nutritional value depends on how the animals are raised, however, as the fatty acid composition of butterfat varies according to the animal's diet.

The very best quality butter is raw (unpasteurized) from grass-pastured cows, preferably certified organic. (One option is to make your own butter from raw milk.) The next best is pasteurized butter from grass-fed or pastured organic cows, followed by regular pasteurized butter common in supermarkets. Even the latter two are healthier choices by orders of magnitude than margarines or spreads. Beware of "Monsanto Butter," meaning butter that comes from cows fed almost entirely genetically engineered grains. This includes Land O'Lakes and Alta Dena.

Research points to the fact that butter may have both short-term and long-term benefits for your health. One Swedish study found that fat levels in your blood are lower after eating a meal rich in butter than after eating one rich in olive oil, canola oil, or flaxseed oil.

The scientists' main explanation is that about 20 percent of butterfat consists of short- and medium-chain fatty acids, which are used right away for quick energy and therefore don't contribute to fat levels in your blood. Therefore, a significant portion of the butter you consume is used immediately for energy—similar to a carbohydrate. The other oils (olive oil, canola, flax, etc.) contain only long-chain fatty acids. The primary nutrients found in butter are outlined in the table below.

Avoiding Processed Food Is the Easiest Way to Protect Your Heart

According to Dr. Kummerow, your body can eliminate trans fats in about a month, which is encouraging. The tragic reality, of course, is that 95 percent of the food that most Americans eat is processed—and processed food is where all this trans fat lies. So, if you want to protect your heart, you need to avoid trans fats by eliminating all processed foods (which would also include most restaurant food). You also need to address your insulin and leptin resistance, which is the result of eating a diet too high in sugars and grains. (Remember, refined carbs also produce small, dense harmful LDL cholesterol particles, which adds to your heart disease risk.) In summary, to lower your heart disease risk, you need to:

Balancing your omega-3 to omega-6 ratio is also key for heart health, as these fatty acids help build the cells in your arteries that make the prostacyclin that keeps your blood flowing smoothly. Omega-3 deficiency can cause or contribute to very serious health problems, both mental and physical, and may be a significant underlying factor of up to 96,000 premature deaths each year.

Best Bets for Back to School

What is Alzheimer's disease?

Got Allergies? Here’s How Dishwashers Can Hurt You and Peanuts Can Help You